In August 1986, I strolled through Nauvoo with my new bride, Ramona. Not many of the restored buildings were there at the time, the restoration project having begun about a decade before. I still remember looking at that big hole at the top of the hill, where the well for the baptismal font was the only visible evidence that a holy building once stood there...

Received in January 1841, this revelation continues the two major concepts of the Restoration: building Zion and building temples.

The Saints were busy draining the swamp they had named "Nauvoo" or "Beautiful." Many still were living in tents or wooden shacks. The area was sectioned off into areas for homes, each with enough space to grow a garden and tend a few animals. Very few brick houses were completed. When we visit Nauvoo today, we see what it was like in 1846, not 1841. 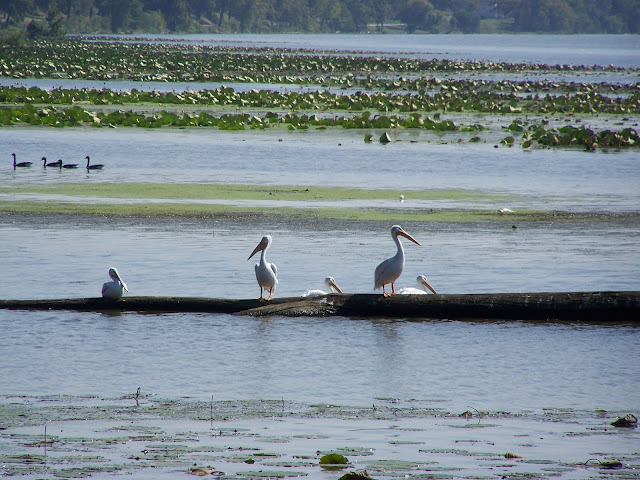 Pelicans on the Mississippi River at Nauvoo (photo by author)

This would be the fourth temple commanded of the Lord: Kirtland, Far West, Adam-Ondi-Ahman, and now Nauvoo. This temple would be larger and more magnificent than the others. It wouldn't stand long, being destroyed by an arsonist's fire and by a tornado less than a decade later. Still, it would be the place where thousands of Saints would receive their endowment of power, just prior to leaving for the Great Salt Lake.

In the Kirtland Temple, the saints received a partial endowment off power. There, they had a Pentecost of visions, gifts of tongues, and angelic appearances. The leaders experienced having Joseph Smith wash their feet. Many received their washings and anointings (what we call initiatory today).

In his hymn, the Spirit of God Like a Fire is Burning, W.W. Phelps included two additional stanzas we do not have in our current hymnbooks. One of the stanzas states:

We'll wash and be wash'd, and with oil be anointed
Withal not omitting the washing of feet:
For he that receiveth his PENNY appointed,
Must surely be clean at the harvest of wheat.
(see article in Wikipedia)

Now, the Lord would expand the work again. Along with the initiatory, we receive the teachings on baptism for the dead.

Imagine how excited the poor and struggling saints must have been to receive such revelatory insight as this! Immediately, members rushed to the Mississippi to be baptized for deceased ancestors. Joseph could do the work for his beloved brother, Alvin, who lived long enough to know about and believe in the plates of gold, but not long enough to read the published Book of Mormon.

In this section, the Lord established a stake of Zion in Nauvoo, which.

"I have planted to be a cornerstone of Zion, which shall be polished with the refinement which is after the similitude of a palace." (vs 2)

Zion's stakes and  temples go hand in hand. Temples cannot be built without the strength of Zion and her stakes. Stakes cannot long endure without a temple at the center.

The Lord commands Joseph to write a proclamation to the nations, telling them that the Restored Church of Jesus Christ was again upon the earth, and would grow to fill the earth. The kings of the world, and the converts from everywhere were to come with their gold and silver to build the temple and establish Zion.

This is an amazing proclamation, given what the saints have just experienced in Missouri. Again, many are still living in tents, are impoverished and struggling, yet they are to proclaim before kings and nations that the gospel is going forth.

Today, a proclamation from the First Presidency and Twelve are easily noticed by national and religious leaders around the world. However, in 1841, most would have thought, "Joseph Smith, who?" Then they would have laughed at the thought of this tiny, crazy religious sect in America would ever expand to be in almost every nation, with hundreds of temples and stakes.

Again, the Lord tells them that baptisms for the dead in the Mississippi River is temporary. They must build a temple and be diligent about the work:

If we don't do our temple work, we shall be rejected as God's people. And we can only do the work within a temple. This is why the Church has been so diligent in building and announcing so many temples in our day. When I joined the Church in  1975, there were only a handful of temples in the world, and most of those were in the American West, where most Latter-day Saints lived. Under President Gordon B. Hinckley, the Church quickly built the one hundredth temple. Since then, over a hundred more temples have been built or announced. In fact, there are now 265 temples built, announced or under construction, over 65 of them announced since Russell M. Nelson became prophet.

There is a reason for all of this stake and temple building. The Lord explained:

"For therein are the keys of the holy priesthood ordained, that you may receive honor and glory." (vs 34)

The fullness of the Melchizedek and Aaronic priesthoods are found within the temple walls. It is there that the great work of helping Christ save mankind from hell and Outer Darkness occurs, and where families are exalted. It is where the sealing powers seal a husband and wife together in the Patriarchal Priesthood, named this because of the great patriarchs and matriarchs of the Bible: Abraham/Sarah, Isaac/Rebekah, Jacob/Leah/Rachel.

And this all begins with saving our ancestors through baptism for the dead, and this only in the stakes of Zion.

"For it is ordained that in Zion, and in her stakes, and in Jerusalem, those places which I have appointed for refuge, shall be the places for your baptisms for your dead.

"And again, verily I say unto you, how shall your washings be acceptable unto me, except ye perform them in a house which you have built to my name?" (vs 36-37)

The Lord then explained that even ancient Israel had a Tabernacle in the wilderness to perform the temple sacrifices and rites. Interestingly, during the trek west, Brigham Young and the first group stopped occasionally and used tents to perform temple ordinances in the wilderness (Journal of William Clayton).

"For I deign to reveal unto my church things which have been kept hid from before the foundation of the world, things that pertain to the dispensation of the fulness of times.

"And I will show unto my servant Joseph all things pertaining to this house, and the priesthood thereof, and the place whereon it shall be built" (vs 41-42) 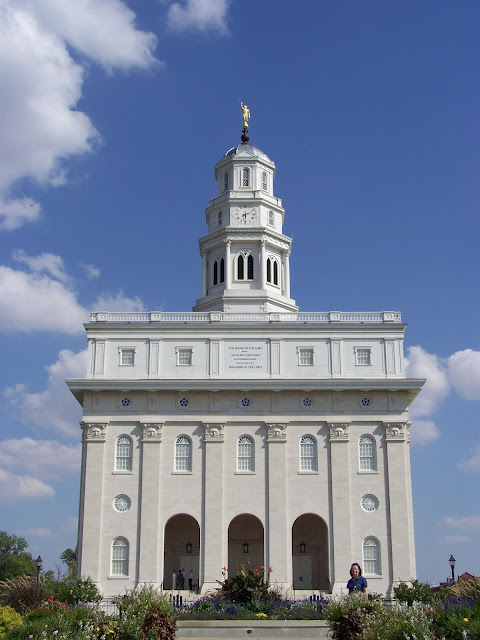 We now know that the endowment would be revealed to Joseph Smith, as well as eternal marriage. That said, the Lord continues to reveal "unto my church things which have been kept hid" that he chooses to reveal to us. The temple is a revelatory place. As we take questions, thoughts, and ponderings with us into the temple, the Lord can reveal answers to us, even things hidden "from before the foundation of the world."

"If ye labor with all your might, I will consecrate that spot that it shall be made holy.

"And if my people will hearken unto my voice, and unto the voice of my servants whom I have appointed to lead my people, behold, verily I say unto you, they shall not be moved out of their place.

"But if they will not hearken to my voice, nor unto the voice of these men whom I have appointed, they shall not be blest, because they pollute mine holy grounds, and mine holy ordinances, and charters, and my holy words which I give unto them." (vs 44-46)

Diligence in our labors allows God to consecrate and make things holy, whether it is a temple site or an individual. Even after all the trials the saints have gone through, the Lord again must remind them to be holy and hearken unto the prophet's voice. Those who are disobedient "pollute mine holy grounds," the ordinances and everything else God makes holy. The holiness of the people determines whether someone or something is sacred or desecrated.

The Lord then explains that when the righteous diligently serve God, but the enemy spoils their efforts, Christ still accepts their sacrifice. He also stated that the wicked who sought to stop the work of God would one day be judged for those evil things. The righteous, who had been forced out of Missouri, would be blessed for their efforts.

So it is with us today. We begin a work that we feel the Lord wants us to accomplish, but then something gets in the way and stops our work. The Lord appreciates our efforts and consecrates those good works we've done. Whether it is a single parent trying to raise children in righteousness, while having the ex spouse attacking the gospel when the children visit; or having to end a mission early because of Covid or government overthrow; etc, the Lord accepts our diligent efforts regardless of the final outcome.

The section then discusses the building of the Nauvoo House, a boarding house for weary travelers. The moneys for this would come from selling stocks. The eventually hoped for profits would go to bless the poor, sick and needy.

The Lord counsels many to pay into the stock for the Nauvoo House, and then gives special counsel to William Law. He is Joseph's second counselor in the First Presidency. William would be faithful for these first few years, wavering when he learns of plural marriage and is heavily chastised for adultery. At that point, he would become one of the major enemies of Joseph and the Church, creating a secret combination that would seek to assassinate Joseph. He would print the Nauvoo Expositor paper, which would condemn Joseph and the Church. The destruction of the printing press and paper would lead to Joseph's arrest and death.

Joseph's other counselor, Sidney, moved to Cincinnati, hoping to find safety from the mobs. He is commanded of the Lord to return to Nauvoo, but refuses to do so. In saving his mortal life, he lost his chance at exaltation.

Of the four members of the First Presidency, only Joseph's assistant president, his brother Hyrum, would remain faithful and diligent in all things. Hyrum would also be called as Patriarch of the Church, filling the space formerly held by his deceased father, Joseph Smith Sr.

With the death of David W Patten in Missouri, a new president of the Quorum of Twelve was needed. Brigham Young was the next in seniority, and was called formally into this position in this revelation.

"I give unto you my servant Brigham Young to be a president over the Twelve traveling council;

"Which Twelve hold the keys to open up the authority of my kingdom upon the four corners of the earth, and after that to send my word to every creature.

This is a key note in the public revelations of the Church to establish that the Twelve Apostles held "the keys to open up the authority of my kingdom" not just in some places, but "upon the four corners of the earth." Because of this and other statements regarding the Twelve, Brigham Young would establish after Joseph's death that the keys of the kingdom were retained with the Twelve Apostles.

While Brigham would be a very rough-around-the-edges leader, he would be the person needed to bring the Saints to the Salt Lake Valley six years later, keeping them intact as a people. He would be the one to build new temples out west, while the other branches of Mormonism coming out of Nauvoo would not build temples or perform baptisms for the dead, nor endow the saints with power from on high.