This revelation was given for the saints in Missouri, who were going through severe persecutions.

In the first verses the Lord is commending them for their faithfulness and prayers, promising to fulfill all their prayers. Yet, we see that not all those promises were fulfilled in the way we would expect. Many prayed to keep their homes in Jackson County and to build Zion. Often, the straightest path to the Celestial Kingdom and Zion is a crooked dirt road, or sometimes just a direction in which to blaze one's own trail. These saints would gain Zion, but it would be in a stake elsewhere. Some would receive their promised blessings after this life.

In verse three, we learn that all of our afflictions are for our good and God's glory. For this reason, in verse one, the Lord encourages us to give thanks in "all things." It is an interesting concept that we see pop up occasionally in scripture. It isn't a call to solely be grateful for our blessings and good fortune, but also for the trials, pains, and tribulations. How easy it is to complain when things are tough. How hard it is to give thanks for those struggles.

We can see the importance of having an eternal perspective, when it comes to both good times and heavy trials. We look forward to eternal life with hope, which is an "anchor to the soul" (Ether 12), and helps us make it through the difficult times. We struggle with modern trials: Covid pandemic, wild fires, hurricanes, flooding, climate change, failed wars, etc. Yet, consider the struggles of the early saints:

Driven from New York to Ohio to Missouri to Illinois to the Great Basin (then, part of Mexico). They suffered from cholera, malaria, and a wide variety of diseases. Abject poverty followed them from place to place. Joseph Smith, the Prophet, had to provide food for his family one winter by chopping wood for others.

Are our trials as terrible as they possibly could be? Today, people struggle with war, pestilence, earthquakes, Civil War, terrorism, government tyranny, and slavery - far beyond anything that Westerners experience. The severity of our trials is often in the eye of the beholder.

Struggling with the side effects from chemotherapy as he fought leukemia, Elder Neal Maxwell noted that his struggles brought a "sharper focus" to his life, allowing him to see which things were truly important, and which were not. He learned, for example, that hair is not as important as he once thought.

How would our lives improve if we were to give thanks in all things? 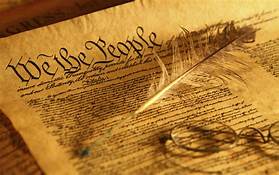 We further read in this section:

"And that law of the land which is constitutional, supporting that principle of freedom in maintaining rights and privileges, belongs to all mankind, and is justifiable before me.

"Therefore, I, the Lord, justify you, and your brethren of my church, in befriending that law which is the constitutional law of the land;

"And as pertaining to law of man, whatsoever is more or less than this, cometh of evil.

"I, the Lord God, make you free, therefore ye are free indeed; and the law also maketh you free.

"Nevertheless, when the wicked rule the people mourn." (vs 5-9)

In these verses, we find some of the earliest statements of the Lord regarding the United States Constitution. While an imperfect document, when combined with the Declaration of Independence, we get a grand framework for ever expanding freedom for man and womankind.

This is the law of the land AND the Lord. We learn that anything more or less than the preservation of rights and privileges comes from evil. God makes us free (as explained in the Declaration of Independence), and the Constitution was designed to protect and expand those freedoms (via amendments).

This should open up discussion and consideration for each of us. Is our federal government focused on its key purpose, as approved by the Lord? Or has it gone beyond its true purpose?  Consider the Afghanistan war: initially it occurred because of a major terrorist attack. We went into Afghanistan and basically defeated the enemy. Then we stayed for 2 decades without real objectives. These actions expanded into Iraq, Syria, Yemen and northern Africa (Arab Spring). Where is the Constitutional objective that protects our freedom?

Since 9/11/2001, the government has increased the deficit by $24 trillion. It now sits at $28.4 trillion. Current plans from government could increase it by another $6.5 trillion this year. How much of this increases and protects freedom?

Venezuela was one of the riches nations on earth 20 years ago. Having more oil than Saudi Arabia, they were able to fund many things for the nation. Under big government programs, the government bankrupted the nation. Where the Venezuelan bolivar (their currency) at one time was 10 to the American dollar, it now requires over 4 million bolivars to equal one US dollar. Freedoms have been lost in Venezuela, as people struggle just to eat and survive, while the government continues to force its evil policies on the people.

Today, we see that Republicans fear Pres Biden, while Democrats feared Pres Trump. Could it be that we have such fear today because we've made the presidency and Congress too powerful? When they take the oath to sustain and defend the Constitution, is it according to the Lord's program or their own agenda? When we ask government to do things, is it to affirm and expand freedom, or to force our own will upon others?

Finally, if the government is not focused on maintaining and increasing freedoms, as the Lord desires, then we may know the wicked are ruling.

I'm not going into details on what this may mean, because it will mean different things to each of us, depending on whether one is liberal, moderate, conservative, or on one of the fringes. My personal view is, there are important things government can do, as the Lord pointed out. Beyond this, we should consider strongly on whether such things should be done by government.

"And I give unto you a commandment, that ye shall forsake all evil and cleave unto all good, that ye shall live by every word which proceedeth forth out of the mouth of God." (vs 10-11)

We do not need government to establish endless laws to restrict us. God calls upon us to live righteous lives, to forsake all evil. With such a guide, there is no need for a litany of laws by government to protect us from ourselves. When government commands us in every little thing, it has replaced God and forcibly taken away agency. Tyrants justify their police states as maintaining the peace. Is there a reason for police? Yes. Do we need to have soldiers on every street corner? Only when government has led us to evil.

Speaking of government, the Lord then explains his laws of going to war. This applies to individuals, families, and government. We are to be peacemakers, forgiving the first, second and third offense. After the fourth offense, we are then free to attack back. Yet, we are also required to give our enemies an opportunity to repent and change.

Do we rush too quickly to war?

This Constitution is not just for Americans:

"According to the laws and constitution of the people, which I have suffered to be established, and should be maintained for the rights and protection of all flesh, according to just and holy principles." (D&C 101:77)

This Constitution is for "all flesh" or all people. God's law of freedom belongs to all people. All flesh does not just mean white men. It includes women, people of color, old and young alike.

Such is a law for anyone wishing to dwell in Zion. Vengeance is the Lord's. We are commanded to forgive, even "seventy times seven."

John Murdock was a widower. His children were living among various members in Kirtland, while he served a mission. One would think he would be given the opportunity to raise his own children. Instead, the Lord had another purpose. John was a powerful missionary, and was promised great gifts of the Spirit as he taught the gospel.

Instead of raising his children, he was to prepare to have them go to Missouri, and then retrn to preaching the gospel for a "few years."

God requires sacrifice, even sometimes of little children. Why? Because eternal salvation of all mankind is the most important thing of all. I know many who wish a life of fun and leisure, and some find that life. However, eternal glory goes far beyond that. Charity, the love of Christ, causes us to have a different set of priorities.

Counsel given to saints in Missouri. They had been thrust out of Jackson County, into neighboring counties. The state of Missouri actually created Clay county as a separate county specifically for Latter-d)ay Saints to gather. Still, persecutions continued.

The Lord begins by explaining why they were suffering: their disobedience to His laws and commandments. Such ranged from those gathering to Missouri without permission, to many refusing to live the law of consecration, to many who bragged to the Missouri settlers that they were going to take over the area. Among the saints, some formed a secret group called the Danites. These were an enforcement group that reeked havoc on non-Mormons, seeking revenge for atrocities done. The Church history volume "Saints," briefly mentions Danites, but does not go into any detail on their wicked actions. We do not know just how much Joseph Smith knew about this group and their secret actions.

We do see from the Lord's teaching,

"Verily I say unto you, notwithstanding their sins, my bowels are filled with compassion towards them. -I will not utterly cast them off; and in the day of wrath I will remember mercy." (vs 7-9)

We potentially live in such a day today. As Latter-day Saints are slow to hearken unto God, we may assume that we are open to such persecutions and trials as well. We receive counsel from living prophets and apostles, and we often see members bristling on-line. Recently, members have been angry over prophetic teachings on immigration, racism, BYU's spiritual responsibility, LGBTQIA+, vaccinations, etc. This isn't an issue or right/left or conservative/liberal. It is an issue of following and sustaining God's oracles.

What happens as we approach the last days before the 2nd Coming, when the Lord requires through his prophet, not just tithing, but consecration? Not just Word of Wisdom, but keeping our bodies and spirits clean? To bury our weapons of war and let God fight our battles? To have us embrace the Proclamation on the Family? To give up our video games and social media? To give up our big cars, houses, and vacations, and begin living modestly? To raise our children in love and righteousness? To keep the temples open and busy 24 hours a day? To leave one's children for a "few years" and preach the gospel?

Zion and a Zion people cannot be created in any other way. We must "stand in holy places." We can only do that if we are holy.

Posted by rameumptom at 6:06 PM

President Dallin H Oaks talk on the Constitution in the October 2020 General Conference is excellent, discussing the importance of freedom and self rule.