Note: this is the fifth book in a series by the Maxwell Institute covering the Book of Mormon.

Different from many other series on the Book of Mormon, this one is a primer for new students of theological studies. 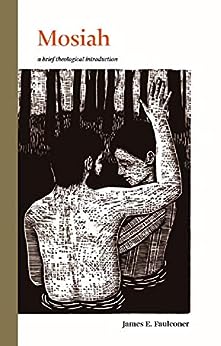 James Faulconer is perhaps my favorite Latter-day Saint theologian and philosopher. He has an innate ability to take difficult concepts and lay them out in a way that makes those concepts understandable, while still engaging and stretching the reader. In his book on Mosiah, Faulconer doesn’t disappoint.

The book contains the following chapters:

Faulconer notes that there are so many things going on in the Book of Mosiah that he could only discuss a few in this introductory book. However, the concepts he shares are illuminating, bringing out key concepts from the book that are very relevant to society today.

“Whatever else we say about the theology of Mosiah, that message is at its core, as it is at the core of the Book of Mormon as a whole. The Book of Mormon comes to us promising that what was true anciently continues to be true today. God’s children are not cast off forever; they will be redeemed.

and redemption? It means to read theologically.” (pg 6)

This, perhaps, is one of the best definitions of what theology (the study of God) is. We can study

The book begins by giving a chronological timeline of the book of Mosiah. This is important. Faulconer shows that the book of Mosiah is a fragmentary document. First of all, its first few chapters were lost along with the other 116 pages that Martin Harris misplaced. We can infer some of the things missing from the lost section: history of King Mosiah 1 and the reign of Benjamin.

The book is fragmented in other ways. While it begins with King Benjamin’s sermons, this event occurs 20 years after the story of Zeniff begins. The book jumps around from one group to the next. It can seem complicated to keep the various story lines separated. In this same way, Faulconer notes that one of the book’s points is that government and civilization is also fragmented. The Book of Mormon discusses the fragmentation of peoples throughout the book: Lehi fleeing Jerusalem, Nephi escaping the Laman, Mosiah leaving the land of Nephi, Nephite dissenters going over to the Lamanites, Gadiantons, the list goes on.  It is this fragmentation or division with which both kings Benjamin and Mosiah2 are concerned. Benjamin will seek to unite his people through unity in Christ, while Mosiah2 will attempt to unify the people by also establishing the rule of judges.

However, as Faulconer notes, “Benjamin’s answer to the question of unity, the question which the book of Mosiah begins, is repentance and keeping covenant rather than a form of government.” (pg 24)

This concept is very important in today’s intense political wrangling and division (2020). The true answers for governmental and civil success are not in the policies we gain from Congress,

Parliament, or any ruler in today’s world. It comes through personal repentance and making individual and communal covenants with God. Imagine if all people everywhere would strip themselves of hubris, anger and self-righteousness, and repent. Then, as with the people of Benjamin, join together in making a covenant of unity (Mosiah 4:1-5).

Faulconer explains that this begins with Benjamin’s sermon - which is likely why Mormon placed this event prior to the story of Zeniff - in explaining just how civilization must be built and maintained.

Interestingly, he gives us a new definition of the word “nothing.” Benjamin teaches us to view our own “nothingness,” which often is confusing for modern Latter-day Saints, as we often teach that we are of infinite importance and children of loving Heavenly Parents. As Benjamin ties his speech to the Creation, Faulconer suggests that we view “nothing” from that same Creation story aspect. Unlike traditional Christianity, Latter-day Saints believe that God created the earth and universe from existing materials. These materials exist in chaotic form. Formless matter is “nothing” compared to the ordered creations of God. So, when we view ourselves as nothing, we can view ourselves as being in a chaotic, formless state, ready for God to bring us out of the void and into a holy and ordered state. Such understanding of this term ties it closer to modern Latter-day Saint views of us being children of God. We are his children, but require God to take us out of our confusion and chaos, and bring us into new life through Christ. Benjamin takes us from our personal Creation to our Fall into sin and formless chaos, and then our rebirth through Redemption through and by Jesus Christ.

Faulconer explains how faith and a view of our own nothingness leads to remission of sins, which naturally leads us to service to others, which equates to service to God. Why? Because it creates unity and civility among us. Again, governments cannot save mankind, only a turning to Christ. His discussion on this topic is fascinating and helps tie many important Book of Mormon concepts together, all leading to our personal and communal relationship with Father and Son.

Abinadi’s sermon has one of the most difficult sentences in the Book of Mormon, in that it isn’t a complete sentence, but a series of somewhat connected clauses:

“And now Abinadi said unto them: I would that ye should understand that God himself shall come down among the children of men, and shall redeem his people. And because he dwelleth in flesh he shall be called the Son of God, and having subjected the flesh to the will of the Father, being the Father and the Son— The Father, because he was conceived by the power of God; and the Son, because of the flesh; thus becoming the Father and Son—And they are one God, yea, the very Eternal Father of heaven and of earth.” (Mosiah 15:1-2)

I’ve pondered for decades on these verses, always feeling that some of its meaning was escaping me. Faulconer breaks down this confusing mess in chapter 5. In doing so, he notes the difficulties and points out the portions that are easily understandable, and which are open for possible interpretation. He offers the possibilities and shares his own views on what each clause means to him. In this, he goes into detail on how Jesus is both Father and Son, while still distinct from Heavenly Father. While many have viewed this fragmentary sentence as Trinitarian, Faulconer shows how it is uniquely Latter-day Saint teaching, bringing up the history of the Trinity, Arianism, and the restored understanding of the Godhead through modern revelation.

In his conclusion, Faulconer reemphasizes key points of the book of Mosiah:

“This fragmentary book about a fragment people is obsessed with the question of unity. How are the people of God to avoid the internal divisions that tear them apart and make them no more God’s people? The things we learn int he book of Mosiah should be read through the lens of that question about preserving the community, the church. As part of answering that questin, the book of Mosiah shows us good kings and one especially bad king, and it shows us Mosiah2’s reform of the Nephite government in response to his concern about bad kings. But it is clear that reform is not the point.” (pg 112)

Faulconer notes that the point is unity, and unity only comes through faith in the Lord Jesus Christ, repentance, receiving a remission of sins, and following Christ in service and unity with our fellow man.

I learned much about the book of Mosiah from Faulconer’s brief introduction to the book. I now will be viewing the sermons by Benjamin, Mosiah2 and Abinadi in a very different way. During this very intense political period, I’ll examine my own views, how I treat others who disagree with me politically, and know that the answer to our divisions, poverty, and disasters is not through government, but through and in Jesus Christ. Knowing my own nothingness, or chaotic form I often find myself in, I can look to being reborn and recreated in Christ.

Brother Faulconer, thanks for again bringing light and understanding to me. It has changed me, and I know any that read this book will also be changed both intellectually and spiritually.

Mosiah, a brief theological introduction by James Faulconer, is available through the Maxwell Institute: https://mi.byu.edu/brief/

Posted by rameumptom at 8:01 AM