Sharon J. Harris is an assistant professor of English at BYU. 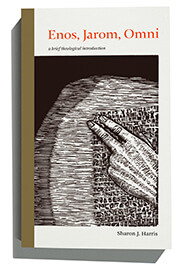 Sharon J. Harris takes a shot at dealing with concepts hiding in these "itty bitty books." They are small books, especially Jarom and Omni, and many of us tend to rush past them to get to the deep doctrinal teachings of King Benjamin in Mosiah and the war stories in Alma. However, Harris gives us a reason to pause for a few moments and consider what exactly is happening in these centuries that are covered within just a few verses.

The book is divided into three chapters: Enos, Jarom and Omni. Each of these chapters are then subdivided into various concepts that Harris wrings out of the text.

In Enos, she notes the time frame given for Enos and his father Jacob-almost 180 years from the time Lehi left Jerusalem to the time Enos wrote down his experience. This means that Jacob must have born Enos later in his life, perhaps in his 70s or 80s, and Enos also lived into his 80s. When Jacob's words sunk into Enos' mind, bringing him to pray, even as a young man, his father probably had been dead for several years.

Harris notes other interesting points that can be found in Enos. One concept that I completely missed in my 70+ times reading the Book of Mormon, is the idea of kenosis. Kenosis, or its verb form (kenoo, empty out, in Greek) is only found once in the Bible: Philippians 2:5-8. In the context, Jesus did not see it as a bad thing (robbery) to be equal with God. For him to do this, Jesus had to empty himself of all his godly power and become mortal, in order that he could be filled with greater Godly power.

Harris suggests that we see a form of kenosis happening with Enos. For him to receive a remission of his sins, he must empty himself of all his sins, fears, preconceptions, etc. In spending the entire day in prayer, he is able to totally empty himself of the world. In doing so, God was then able to fill Enos with something different: godliness. Enos now has a new view of the world, where he not only is able to pray for his friends and family (the Nephites), but also for his feudal enemies. Suddenly, with the promise of God to preserve the sacred records to someday come to the Lamanites (the Nephites having been destroyed as a people in Enos' future), the Lamanites become his "brethren."

"Only that which is whole or complete can fully empty itself. Being whole is a necessary precondition of emptying in this saving, glorifying way. In Enos's account, as we've seen, he writes these activities back to back--his soul was made whole, and then he poured his whole sould out (see Enos 1:8-9). In what sounds like a tongue twister, Enos could not pour out his whole soul until his soul was whole." (p 30)

First we must empty ourselves of those things that impede our spirituality. Once forgiven of our own sins, or made whole, then we can empty ourselves in seeking blessings for others.

The book shows us the struggle Nephite prophets and people went through, struggling to deal with a Catch 22: the Lamanites were mortal enemies, yet with those same enemies came the promises of having the Lehite family restored in the latter days. For Enos, he struggles with this dichotomy: he prays, emptying himself, for Lamanites as his brethren, yet later speaks of them as blood thirsty, filthy animals, who sought the destruction of his brethren, the Nephites.

With the concept of Enos and kenosis comes the thought: what must I do to empty myself of all my misconceptions, prejudices, jealousies, fears, worries, temptations, sins, and worldly desires? Is this something that is done once, or many times within a lifetime? Then, once emptied and made whole, what do I do with that newfound spiritual strength? Perhaps this is one of the greatest pearls I gained out of Harris' book. My view of myself and the world will not be the same.

With Lamanites as the long-term salvation for the Lehite promises, Harris asks us:

"Let's think about the present. Who feels like your enemy? The person who makes fun of your child? The unreasonable neighbor? An ex? A co-worker out to get you? The one who lies and still gets prominent church callings? Or, who as a group seems to be against everything you stand for? Socialists? Democrats? Republicans? Libertarians? Pro-choice advocates? Pro-lifers? Environmentalists? Feminists? Preppers? Neo-Nazis? Globalists? Pornographers? Suburban racists? To put it in Mormon's terms, which manner of -ites? Whoever they are and in whatever ways they are dangerous or destructive, would you engage in a spiritual wrestle over a long period of time to secure blessing for them and their descendants? Enos's experience suggests that the same people we view as antithetical to our ideals could ultimately play a key role in our salvation." (p 37)

Wow! That's a lot to take in, especially as a Libertarian in a divisive election year!

In the Book of Jarom, Harris notices something that is not there.

"In Jarom's text, then, let's take a look at an important omission, something Jarom does not pass down. Jarom is the first writer of the small plates not to use the word, "filthiness."" (p 51)

She explains that, beginning with Nephi's Vision of the Tree of Life, prophets have seen filthiness. Nephi saw Laman and Lemuel standing at the head of a river, which he termed as "filthy." Later, Nephi, Jacob and Enos would all consider the Lamanites filthy. According to Harris, this is one way in which the Nephites developed a bias against the Lamanites. They viewed them as filthy in order to make them undesirable and the "Other." Once turned into sub-humans, Nephite discrimination against Lamanites was easily justifiable. Harris suggests that we tend to de-humanize groups of people in our own day, calling them "filthy" in our own way. It isn't a temporary situation, in the view of the Nephites, the Lamanite filthiness was a state of being.

"...could see Lamanite waywardness as confirming the prophecies and as evidence of their own righteousness and superiority." (p 60)

The book recognizes that as we read the Book of Mormon, many Latter-day Saints favorably compare themselves with Nephites. Harris takes this a step further for us. If we compare ourselves with the Nephites, does that include their times of wickedness? Their embracing Gadianton robbers? Their final destruction? Harris notes that this is a sobering thought. It is.

Harris covers several more ideas from the 3 books. One of her last thoughts that intrigued me was the idea that Jarom and the writers in Omni lived in the "middle" age. They didn't have the excitement of escaping Jerusalem with Lehi, nor the exhilaration of touching the wounds in the resurrected Jesus' feet. Instead, they dealt with a middle period of time, in between the creation of the Nephite people, and the coming of Christ in power. Still, Jarom and the prophets prophesied of Christ as if he had already come, even though his coming was afar off.

Today, we also live in a middle period. We are exactly 200 years past the First Vision. No one is alive that knew Joseph Smith or Brigham Young. None of us experienced the dedication of the Kirtland, Nauvoo or Salt Lake Temples. Nor have we seen the coming of Christ in glory for the 2nd Coming. As with Jarom, we too, are in the middle. Harris then asks, what are we doing with our precious time? Have we settled in comfortably, or are we striving and preparing for that coming age. Do we work and live as if Christ has already come? As if Zion was already established?

As you can see from these few examples, there's a lot packed into these "itty bitty books." Are you ready to have your understanding of the Book of Mormon expanded? Then take a look.