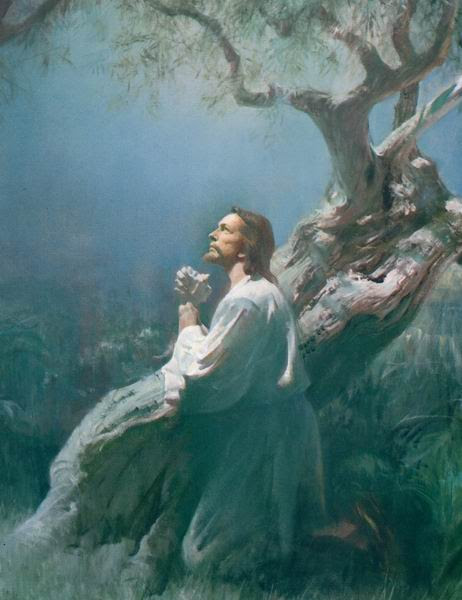 We now go to the place where the Lord began his atoning sacrifice, Gethsemane. Why did he go to Gethsemane to pray? He was in the city of Jerusalem, with a million people in attendance for Passover. The place should have been crowded, perhaps with individuals camping out on the hillsides. Gethsemane was a garden, or better said, an olive tree orchard. In the orchard is found at least one olive press. Gethsemane means “olive press”. This press is within a cave located in the middle of the orchard. Outside of harvest time it would have been used, especially during the major festivals, as a place for travelers to stay. It is quite likely that Christ entered the cave, asked his disciples to remain nearby while he prayed privately inside. This poetically ties Jesus’ birth in a cave/manger to his atoning sacrifice in cave/Gethsemane and ultimately to the cave where his body laid interred until his resurrection.

The Beginning of the Atonement

For Catholics and some other Christians, Jesus’ great work was done solely on the cross. However, Latter-day Saints believe that Jesus’ atonement began in Gethsemane and culminated on the cross (to be discussed next lesson). Jesus had to overcome both physical and spiritual death. The physical death of the cross would be trumped by resurrection. The spiritual death, or mankind cast out from God’s presence, would be healed by Jesus’ atoning sacrifice that began in Gethsemane and continues to this day for each of us.

In Gethsemane, we know that “he shall go forth, suffering pains and afflictions and temptations of every kind; and this that the word might be fulfilled which saith he will take upon him the pains and the sicknesses of his people” (Alma 7:11)

Or, as Nephi explained,

“And he cometh into the world that he may save all men if they will hearken unto his voice; for behold, he suffereth the pains of all men, yea, the pains of every living creature, both men, women, and children, who belong to the family of Adam” (2 Nephi 9:21).

Of the connection between Adam and Christ, the apostle Paul noted, “For as in Adam all die, even so in Christ shall all be made alive” (1 Corinthians 15:22). We will not only all resurrect, but we will all be made spiritually alive in Christ, brought back into the presence of God, upon the condition of faith and repentance.

We understand little of the spiritual atonement. We know that it was a dreadful experience, even for Jesus.

“41 And he was withdrawn from them about a stone’s cast, and kneeled down, and prayed,
42 Saying, Father, if thou be willing, remove this cup from me: nevertheless not my will, but thine, be done.
43 And there appeared an angel unto him from heaven, strengthening him.
44 And being in an agony he prayed more earnestly: and his sweat was as it were great drops of blood falling down to the ground” (Luke 22).

He had begun the process of taking upon himself all the sins of the world. So spiritually painful was this that it caused the blood vessels around his sweat glands to dilate and burst. Then, as he sweat, it mixed with the blood, coming out of his pores in drops.

As noted, we do not really know how the spiritual atonement works. There are various theories available, some are indirectly noted by modern apostles of the Church. The theories include, Ransom, Substitution, Satisfaction, Punitive theories of atonement (see below for links).

In Ostler’s theory, Christ is not punished nor ransomed directly for our sins. Instead, we have fallen from God’s presence and there is no way we can return by ourselves. When we exhibit faith and truly repent of our sins, the Savior embraces us in his love and forgiveness. As he accepts us into his compassionate embrace, we are filled with His love, compassion, and light. Yet, while he embraces us, Jesus takes into himself our pains and sorrows brought on not only by our sins, but by the hardships of life. In Gethsemane, he felt the pains and sorrows of all those who to that point had sinned or sorrowed, but then sought deliverance from God. Today, he continues feeling momentary pain as he embraces us in his love, engulfing our hurts within that love. So, in this theory, the atonement is ongoing. Every time a person reaches to Christ because of spiritual or physical pain, the person is healed through the atoning and loving embrace of our compassionate God and Savior.

As we ponder just how much pain each of us suffers, whether from sin, fear, mental anguish, or physical pain, we can truly “stand all amazed at the love Jesus offers me.”

In an interesting twist in the story in Mark 14:51-52, a young man in a linen cloth is caught by the Roman guards. The young man is able to slip away naked. Why add such an odd story?

Some scholars believe Mark was speaking of himself. It is possible that he was literally asleep when these events occurred. However, for LDS members, it is also possible that the cave was being used by the Christian-Jewish sect to perform temple ordinances. The cave may have been used as a makeshift temporary location to perform ordinances, such as initiatory and endowments.

In the initiatory, the person is washed and anointed with water and oil, as a symbolic cleansing prior to receiving the other ordinances of the temple. It could be possible that the young man was receiving this ordinance when the soldiers showed up.

This concept is strengthened by the controversial Secret Book of Mark. Scholar Morton Smith claimed to have found an old letter attached to the back of a medieval book. The letter was supposedly from Clement of Alexandria, who described a portion of a Secret Book of Mark, wherein a young man (Mark?) receives a secret ordinance at night from Jesus, while wearing nothing but a linen cloth.

There is lots of scholarly controversy surrounding this letter. Some claim Morton Smith created it to fool the scholarly community. Others think it might be a medieval forgery. Still there are some who think it to be authentic.

Secret Book of Mark: http://joelsmonastery.blogspot.com/2009/10/clement-of-alexandria-and-secret-book.html
Posted by rameumptom at 11:02 AM