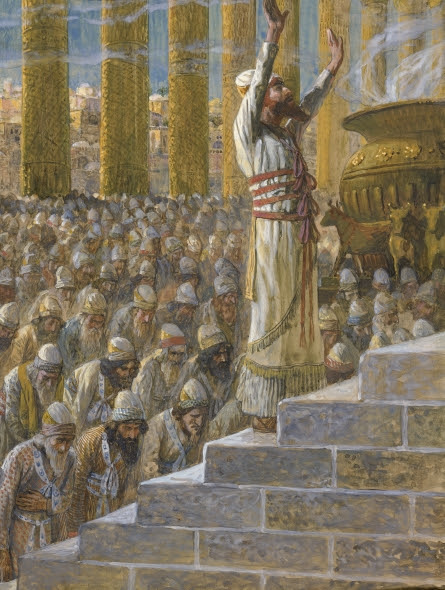 Solomon Slaughters His Enemies
With David growing old, conflict arose between his many sons as to who should replace him. The eldest living son, Adonijah, presumed it should be him. David never dissuaded Adonijah from this presumption. Joab, general of David’s armies, and Abiathar, one of David’s high priests (a descendant of Moses), supported Adonijah in his quest for kingship.

Solomon was supported by David’s other chief priest, Zadok, a descendant of Aaron, several military leaders, and Nathan the Prophet. As well, Bathsheba still held the attention of King David over his other wives. She went to him and encouraged him to accept Solomon as heir to the throne. Nathan followed her in, repeating the need to select Solomon. David agreed and had Zadok and Nathan anoint him king (1 King 1).

Upon David’s death, Solomon immediately went forth to destroy his enemies and competition. Joab was put to death for his betrayal and violent life. Adonijah and many others of David’s sons were slain. For the high priest Abiathar, Solomon commanded:
“Get thee to Anathoth, unto thine own fields; for thou art worthy of death: but I will not at this time put thee to death, because thou barest the ark of the Lord God before David my father, and because thou hast been afflicted in all wherein my father was afflicted” (1 King 2:26).

In essence, Abiathar and the priests who were direct descendants of Moses were no longer allowed to serve in the Tabernacle, nor before the king. They were exiled in disgrace. Some scholars see this as the beginning of political rivalry between the sons of Aaron and of Moses. As the groups struggled for power in the Tabernacle and later the Temple, it is believed that the Old Testament’s writings were changed and even rewritten to reflect personal views. In a previous lesson, we discussed the various authors of the Old Testament (J, E, P, D, R) and how each had their personal beliefs/agenda to promote in the national history. An example of this comes in the Books of Chronicles, which are a second set of books to match the Books of Kings. However, in Chronicles, neither David nor Solomon are escoriated for their huge sins. In fact, Solomon remains praiseworthy throughout the entire Chronicles. It obviously was not written by Abiathar. Abiathar and his sons would be connected later to the northern Kingdom of Israel, who would disdain Solomon and his descendants. According to what is called the “Documentary Hypothesis”, some of their writings/beliefs would come forth later in the writings of “E”, which would honor Moses while excoriating David and Solomon. Some LDS scholars have suggested that the E source is none other than the Brass Plates of Laban, which praises Moses, while condemning David and Solomon for their promiscuity.

“And the king put Benaiah the son of Jehoiada in his room over the host: and Zadok the priest did the king put in the room of Abiathar” (1 Kings 2:35).

We find incongruencies in 1 King regarding Solomon’s actions. After defeating his internal enemies, he establishes peaceful ties with surrounding nations. One of his first acts is to develop a connection with Pharaoh by marrying his daughter (1 Kings 3:1). While this made enormous sense politically, it was discouraged by the Mosaic Law (only marriage to Canaanite women was actually prohibited). Still, he ended up with 700 wives and 300 concubines (slave wives). Most of these wives were considered foreign princesses, meaning he focused his relationships around political necessity. His son and heir, Rehoboam was from his Ammonite wife.

Still, Solomon in his early years loved the Lord. He and the people sacrificed frequently to Jehovah in the high places - the only places available at the time to worship. Why? Because while there were two Tabernacles, the one in Jerusalem was probably meant mostly to contain the ark of the covenant, but not perform sacrifice. Meanwhile, the high places (Hebrew: Bamah) were temples in the wilderness. So sacrificed Adam, Abraham, Isaac, Jacob, and Moses.

It is during one of his trips to Gibeon to sacrifice, where the Lord appeared to Solomon in a dream. Solomon is offered anything he could desire: wealth, power, etc. Solomon chose wisdom to lead the nation.

“Give therefore thy servant an understanding heart to judge thy people, that I may discern between good and bad: for who is able to judge this thy so great a people?
“And the speech pleased the Lord, that Solomon had asked this thing” (1 Kings 3:9-10).

Solomon’s wisdom became renowned in Israel and abroad. Many came to hear the wisdom he espoused. This included the Queen of Sheba. Sheba or Saba was a nation that spanned a large area, including modern Eritrea, Somalia, Ethiopia, and Yemen. This would have included a large portion of the spice trade route through the Arabian Peninsula, providing her with means to bring many riches with her to Solomon on her trip. The Bible tells little of her sojourn in Israel, but there are ancient stories that expand upon it. Ethiopian tradition (Kebra Nagast), says that Sheba became his wife, and they bore a son. This son became Menelik I, first ruler of what would become the 2900 year reign of Ethiopia. This reign went almost continuous, with just a couple disruptions, until the royal line was overthrown in 1974. According to the tradition, Solomon made a copy of the ark of the covenant, which he placed in the Tabernacle, and gave the original to Sheba. Supposedly, the ark is still maintained in the land of Ethiopia to this day. 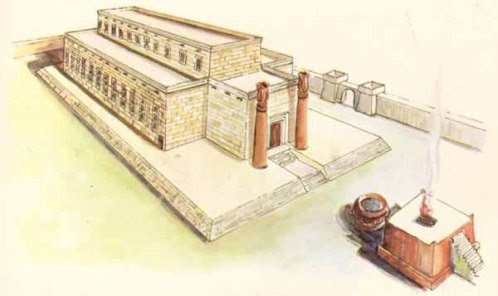 To fulfill his father David’s desire to build a house to the Lord, Solomon began plans to build the temple. He did this in conjunction with building his own palace, which many scholars believed was larger than the temple to Jehovah. The temple would begin in his fourth year as king, and would take seven years to accomplish, while his palace required thirteen years to build. These projects were accomplished in a short time because Solomon used slave labor from the Hittites, Amorites, Perizzites, Hivites and Jebusites.

Solomon contracted to King Hyram of Tyre for the wood and many other things to build the temple. Masons have a tradition of Hiram Abiff, a widow’s son (1 Kings 7:13-14), being killed for refusing to give up the secret passwords known by Masons, related to the temple of Solomon and the original Hiram of Tyre (also a widow’s son). The last name, Abiff, while not found in the Bible, could possibly be from the Hebrew word for “father” or “abi”. In the Nauvoo period, many Latter-day Saints became Masons. Some noted that Joseph Smith was also a temple builder, and (by that time) a widow’s son, perhaps a new Hiram Abiff for the last days.

Solomon’s temple was 40 cubits long, or about 60 feet. Cherubim (angel warriors) were placed in the Holy of Holies standing 15 feet tall and with 15 foot wingspans that touched the walls and each other in the middle. Under them would sit the Ark of the Covenant and the Mercy Seat. This was God’s special room and throne. It would represent his throne in heaven, which was surrounded by concourses of angels worshiping him. It would also represent the ancient Divine Council, where archangels (governing angels) including the warrior angel Michael, would stand in council with God (see Isaiah 6).

Two giant pillars were built to set in front of the temple. These pillars were 18 cubits (27 feet) high. Their names were Boaz (Strength) and Jachin (Jah/Yahweh establishes). John the Revelator made a significant mention of these pillars and how they relate to the righteous:

A large brass basin of brass was also built and set upon twelve oxen representing the tribes of Israel. This basin would be used for cleansing rituals according to the Mosaic Law. The priests would wash in the basin in order to be clean prior to entering the temple, just as they did in the Tabernacle of Moses. Today, LDS also have a basin upon 12 oxen in their temples. These are used for proxy baptisms for ancestors who have died without the opportunity to receive baptism (1 Corinthians 15:29).

Upon finishing the temple, the ark of the covenant was placed under the cherubim.

“The priests brought in the ark of the covenant of the Lord unto his place, into the oracle of the house, to the most holy place, even under the wings of the cherubims.
“For the cherubims spread forth their two wings over the place of the ark, and the cherubims covered the ark and the staves thereof above” (1 Kings 8:6-7).

Solomon dedicated the temple in prayer and with innumerable sacrifices. In a dream, the Lord told Solomon that he accepted the temple and that Israel would be blessed as long as they were faithful to God.

Sadly, Solomon’s many wives took a toll on him. Not only did he marry Egyptian princesses, but also many Canaanite princesses, as well.

“1 But king Solomon loved many strange women, together with the daughter of Pharaoh, women of the Moabites, Ammonites, Edomites, Zidonians, and Hittites;
“2 Of the nations concerning which the Lord said unto the children of Israel, Ye shall not go in to them, neither shall they come in unto you: for surely they will turn away your heart after their gods: Solomon clave unto these in love” (1 Kings 11:1-2).

Not only did he cleave unto the women in love, but to keep them happy, he built temples for their gods, rather than convert them to worship Jehovah, which was expected of all those Israel married from outside the faith. In giving into them, he first gave other gods equal time, and ignored the injunction to “have no other gods before me.” Finally, he began giving much time to worshiping other gods, creating graven images of the many gods. Jehovah was competing for equal time in Jerusalem and the surrounding area.

Solomon began to worship other gods, including Chemosh, Ashteroth (goddess), Milcom and even Molech. Molech was an exceptionally wicked god, who required that the children pass through/in fire. Those that did not die were considered blessed by the followers of Molech. Those children who died were a sacrifice to the god, who demanded a high price for his blessings. Why one would worship Molech rather than Jehovah really makes one wonder. Yet Solomon did.

David’s throne was to last forever, according to some sections of the Old Testament. God could not take away that promise easily. So, he told Solomon that half the kingdom would be ripped from his hands and given to his servant. Because of God’s promise to David, it would not happen in Solomon’s lifetime, but in his son’s life. Doesn’t seem like much of a punishment to Solomon, does it? However, in addition to the curse, the Lord also stirred up enemies around Solomon. He had decades of peace while faithful to the Lord. Now the Lord would punish him and Israel for allowing such abominations to enter into the Promised Land.

We get a taste in Solomon’s day of how David’s line will lose Israel. Jeroboam, whom Solomon made ruler/chief captain over the tribe of Joseph, was ordained by the prophet Ahijah, to be king over 10 of the tribes. Upon learning of it, Solomon went the direction of Saul, seeking to slay Jeroboam through the rest of Solomon’s days.

Solomon would sleep with his father, David. But in the end, he left the kingdom divided because of his greed, hatred of internal enemies, and becoming more friendly with foreigners than with his own people.